Getting to know Vladivostok

A classical excursion around Vladivostok city which includes visits to the most popular tourist attractions.

We will familiarize you with:
Excursion details:
After a short story about the city we invite you to look at it from a bird’s eye view – the Eagle’s Nest hill. There is no better place to observe the city. A night view from the hill is especially fascinating! The Eagle’s Nest hill will not only give you the opportunity to greet the city from the top but also a chance to take nice photographs.

Having enjoyed the cityscape let’s visit the historically famous Central square that is also named the Square of the Fighters for the Soviet Power. The Monument to the Fighters for the Soviet Power on the Far East, that had been built before the square appeared, is also noteworthy. This square is spacious and wide, just like Russian soul. It unifies Vladivostok citizens because all mass events and festivals are held here. This Square is often a starting point for a long promenade thanks to its location in the city heart near Korabelnaya embankment, historical Svetlanskaya and Fokina streets, GUM (department store), the Art gallery, best restaurants and other interesting spots. Get acquainted with eventful history of this unique place! 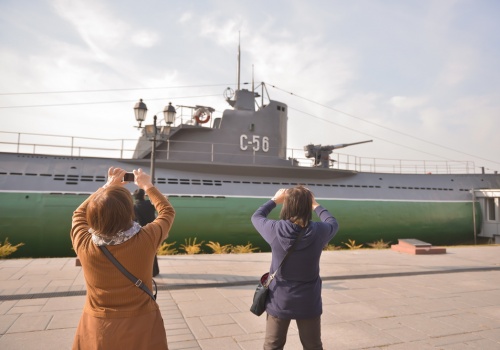 The Soviet submarine S-56 museum is the most popular museum among Vladivostok visitors. This is one of a few boat – museums that was operable in the past. It is the Second World War submarine that was awarded with the Order of the Red Banner in 1944. You’ll have a chance to go inside a real submarine and know its history. Many parts of it have been saved in their original form! 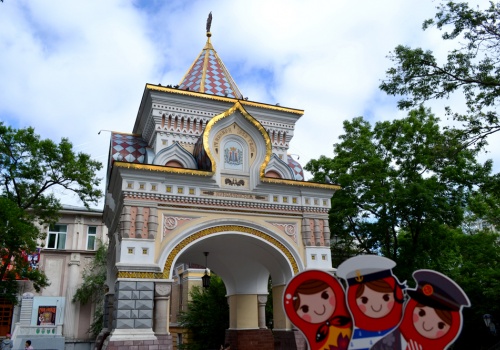 In a few steps from S-56 you will face with the Nickolas Triumphal Arch. This is a truly symbolical place because it was constructed to welcome a crown prince of the Russian Empire Nickolas when he visited Vladivostok on the occasion of opening the world famous Trans-Siberian Railway. It was demolished in the Soviet period and reconstructed in 1998 with the help of old photographs because technical drawings had been lost. The renewed Arch was unveiled in 2003. We invite you to look at the real Russian “czarist” Arch with your own eyes! 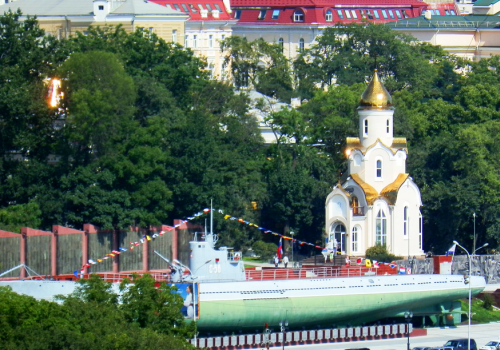 The Chapel of St. Andrew that you’ll see after is located close to the Triumphal Arch. This is a small snow-white temple which was built and consecrated just 10 years ago but has already caught the fancy of Vladivostok citizens and guests. 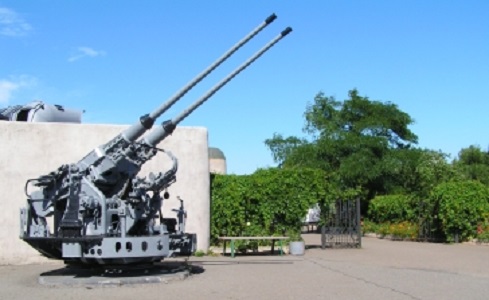 Visit to the Vladivostok Fortress will be the final stage of the excursion. Construction of one of the world strongest fortresses was commenced at the end of the XIXth - the beginning of the XXth but wasn’t finished due to the First World War and the October Revolution that followed it. Only Russian engineers, builders and soldiers participated in the construction process. The fortress was of great importance for decades which is indicative of its quality and resistibility. This place of interest continues to attract attention of both, adults and children. Take a walk to the construction with over 100-year-long history! 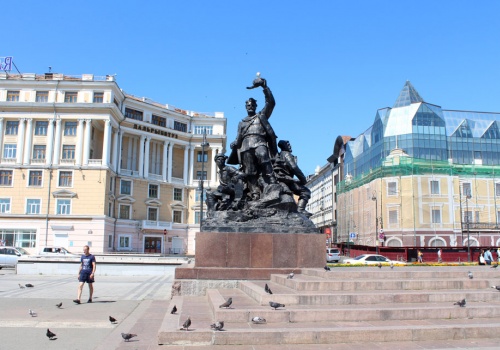 After finishing the excursion our driver will drive you back to a hotel or drop you off at the Central square where you can continue exploring our city by yourself. You can also try dishes of Russian or any other cuisine in one of Vladivostok restaurants. During the time left our guide will show you some other interesting places such as the Railway station, the Marine terminal, Fokina street (Arbat) etc.
Experts of the inbound department: